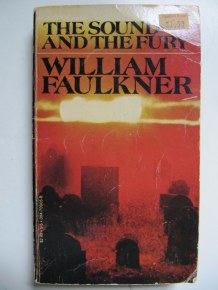 The Sound and The Fury by William Faulkner

What kind of bizarro book is this??  Who says this gets to be a classic?  Why?  Because it’s ridiculously difficult to follow and figure out what in the world is going on?

Or perhaps it was the pioneer novel for depicting different character’s point of views with each chapter.

Who knows.  What I do know is that it was not an easy read.  It was really tricky to try and figure out who they were talking about and what time period and what was going on.  And it was such a relief to finally finish it!

The classic dysfunctional family.  An alcoholic Father. A perpetually “ill” Mother.  A severely mentally handicapped 1st born son, Benjy. The 2nd son, Quentin, whom the family sells part of their land for him to go to Harvard, who drowns himself. The 3rd son, Jason, cold and bitter and nasty.  The daughter, Caddy, who shames the family by getting pregnant at a young age, out of wedlock.  Her bastard daughter, Quentin, adopted by the family and targeted by Jason as the scapegoat for his bitterness towards them all.