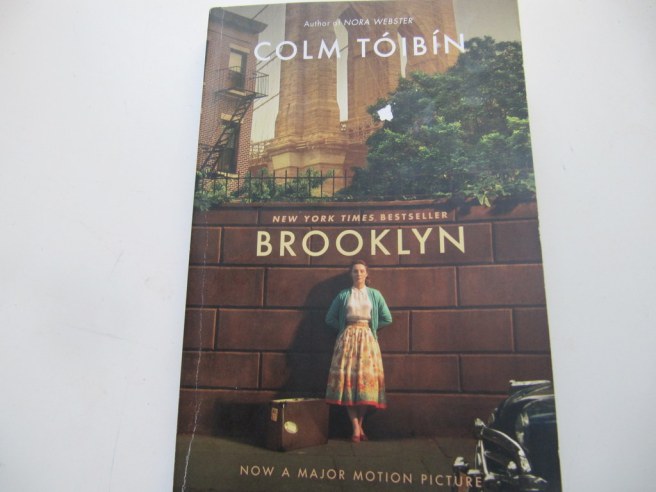 “Once you cross the Atlantic, you never feel at home.” – Anonymous

The AJ Fikry in my town, our local bookstore owner, recommended “Brooklyn” to me.  I trust him completely when it comes to picking a good read.  But, halfway through, I didn’t think I’d end up liking this book.  It felt like a typical, predictable, romantic coming-of-age immigrant story.  And then it wasn’t…

OK.  So here’s the story of a young Irish girl, Eilis, who lives with her Mom and her sister, Rose.  Her father has recently died and her 3 brothers have gone to England to live to make money to send home to their Mom.  Her sister also works as a bookkeeper in town.  Eilis, can’t find employment, and although she’s studying to become a  bookkeeper, there isn’t much opportunity for work.

So her Mother and sister devise a plan to send her off to America, to Brooklyn, with a local Irish priest who started a church there.  The priest can get her employment, room & board and the promise of schooling.

All of this is done without Eilis’ consent.  Rose and her mother plan her life, essentially, and she just goes along with it.  Why?  Was it the times?  Did you just do everything possible to bring in money for your family?  Why didn’t the mother work?  Why didn’t Eilis stick up for herself?  Why didn’t they at least send her closer to home and where she’d be close to family, in England?

She goes to Brooklyn, starts school and meets a nice young man, Tony.

You can see Eilis slowly come out from under the shadow of her Mom and her older sister, as she immerses herself into her new life in Brooklyn.  She becomes more sure of herself, with a stronger will, empowered by her experiences and her ability to survive and thrive.  She embraces her schooling and although neither you nor she are quite certain the degree for which she likes Tony, there is a mutual respect and enjoyment of one another’s company.

Then her sister dies and she is called back to Ireland.  Before she leaves, Tony convinces her to marry him, privately, as a promise to return.

Does she do this for him?  Because she feels as though he needs it and this all seems like a fantasy world anyway?  Or does she do it for herself, knowing that the only way she’ll escape the pull of her homeland is with an ethical dilemma such as this.

She comes back home and at first just dreams of returning to Brooklyn as quickly as possible.  Her house feels foreign and her mother is smothering.

And little by little, you watch Eilis recede into the young girl who is defined by her Mother’s wishes and goes with the flow of whatever is decided for her.  Her Mother gets her a job at Rose’s old company.  She helps set her up with a young man from the area.   She even tries to dress her in Rose’s old clothes.  Looking to replace the daughter that she lost, by the other daughter that she sent away.

Eilis comes to the realization that she likes and may even love the young man in Ireland and does not love Tony, that she could have a dream job and life if she stayed in Ireland, and feels as though Brooklyn never happened; that it was all a dream.

Just before the young man proposes, and things get too far, she tells her mother that she’s engaged to a boy in Brooklyn and her Mother tells her that she must return, and honor that vow.

So in the end, did Eilis get what she wanted?  Did she ever know what she wanted?  Did she want to live her life in Ireland, working as a bookkeeper, marrying a well-to-do young man, living right down the street from her Mother and perhaps always living a bit in the shadow of Rose?  Or did she subconsciously get married as a life-line?  Because she knew that it would be easy to get sucked back into that world, when she felt, deep down, that what Brooklyn offered her was what she really wanted?

In the end, is Eilis happy?

“Homesickness – the chronic illness of the expatriate.” – Anonymous